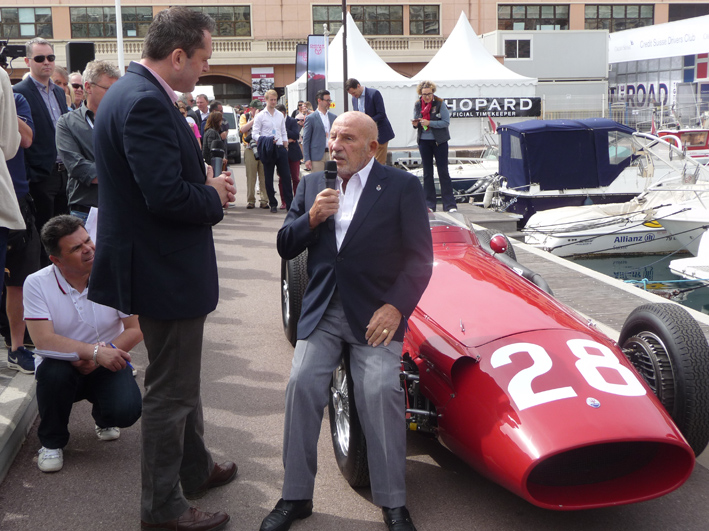 On May 13, 2016, I had the privilege of meeting Formula One legend Sir Stirling Moss, who was being honoured at the Historic Grand Prix in Monaco.

It had been 60 years to the day that the British driver had won the 1956 Monaco Grand Prix for the Officine Alfieri Maserati team. As the 86-year-old sat on the front wheel of car #28 in front of the Rascasse turn, you could see a twinkle in his eye reliving the 3-hour race. (The car, he said, cost him £3,800. “Maybe I should have held on to it.”).

“It is extremely difficult to concentrate for three hours. I’d see the driver behind me, and every lap, I’d say to myself, ‘I’m going to try to do a perfect lap,’ which of course is not possible.”

He added that “from the driver’s point of view, there is not much change at all [in Monaco]. There are so many places you can see the drivers ahead or behind you on the hairpins, so I’d wave at the other drivers to try and make it look like I wasn’t trying too hard while I was actually clenched on the ground.”

Sir Stirling commented on being forced into retirement at the age of 83 but his charm shined through. “Monaco is such an intimate course. Every lap I’d blow a kiss to this woman with the pale pink lipstick … it never went anywhere though …”

Between 1955 and 1961, the late Sir Stirling finished as championship runner-up four times and in third place the other three times. “I would not swap my era for now. I had the pleasure of 600 races because I loved doing it. There’s no pleasure, exhilaration or fun nowadays. Driver input those days was more by the driver.”

Typically held every other year two weeks before the Monaco Grand Prix (except this edition as the 2020 event was cancelled for reasons you are well aware of and the E-Prix is on May 8), this is an open-air museum of legendary cars racing the same F1 circuit. You don’t have to love race cars to appreciate the spirit and energy of the Grand Prix Historique de Monaco weekend.

Much like the nod to Sir Stirling in 2016, this year’s 12th edition celebrates Ferrari’s first Grand Prix victory 70 years ago in 1951 with driver Jose Froilan Gonzalez at Silverstone. Keep an eye out for the many Scuderia F1 sports cars, one dating back to 1929.

By the way, Charles Leclerc is the first Monegasque driver to ever sign a deal with Ferrari and the 23-year-old recently gifted his first season SF90 race car to Prince Albert for HSH’s private car collection museum in Fontvieille. On May 23, Leclerc hopes to become the first native to win the Monaco Grand Prix since Louis Chiron drove a Bugatti to victory in 1931.